Good news for you playstation lovers out there! 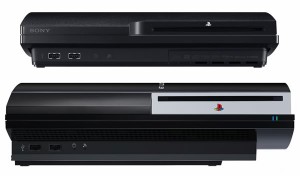 Some hackers out there have cracked open the level 0 bootloader security on the playstation 3. While this does not mean much for those who are using a stock ps3 it means quite a bit for the homebrew hacked firmware users out there. It as of right now means that the cat and mouse game is over for the currently modded systems because there is no firmware hole to patch. New released firmware versions can just be customized and signed for the modded systems and there is nothing that sony can do it. Now if only they could do that to the iPhone then I would be super happy! 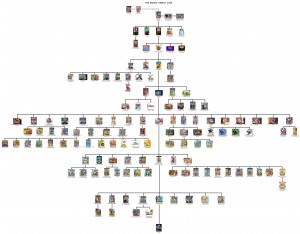 This is just full of awesom! It is [most?] every mario game ever created in the form of a family tree!

Obama ads to be placed in video games – Gamers doomed

Ok so picture this. Your playing Nascar on your xbox 360 when you look at the scenery and see obama. OMG! H4X! you think. No thats not hacks. Thats the game indistry saying that $60 for a game is not enough for them. No they have to sell adspace in the game. So ontop of that $60 they are making god knows how much more. This for me seems like a epic fail! Now maybe if I was to have spent $10 or $20 for a game and they throw a ad here and there that would not be to bad. But paying that much and still getting ad’s is dumb. Someone needs to hack the game and put something funny on there. Like oh I dont know. Maybe a plug for Themodshop. Or a picture of Steve Jobs using a computer with Vista on it.

WASHINGTON (AP) — Too busy playing video games to watch presidential ads on television? Barack Obama has found you, too, by becoming the first presidential candidate to buy ad space inside a game.

Eighteen video games, including the extremely popular “Guitar Hero” and “Madden 09,” will feature in-game ads from the Obama campaign in the final weeks before the election. The ads — appearing on billboards and other signage — remind players that early voting has begun and plug a campaign Web site that encourages people to register for early voting.

“These ads will help us expand the reach of VoteforChange.com, so that more people can use this easy tool to find their early vote location and make sure their voice is heard,” said Obama spokesman Nick Shapiro. The campaign did not say how much it cost to launch the ad blitz on gamers.

The idea of embedding advertising temporarily inside a video game is relatively new, having only begun about 18 months ago, and Obama is the first presidential candidate to buy space, according to Holly Rockwood, a spokeswoman for Electronic Arts, Inc., whose company is featuring the Obama ads in nine of its games.

The Democrat’s ads are aimed primarily at game players who like sports, including NASCAR, the NBA, the NHL and skateboarding, meaning EA Sports’ motto, “It’s in the game,” now applies to presidential politics as well.

Rockwood would not say how much the ads cost, but she said they are running on the Xbox Live versions of the game through Nov. 3. They began earlier this month.

“It reaches an audience that is typically hard to reach — young males, roughly 18 to 34,” said Rockwood. “That’s very appealing to our advertisers.”

Rockwood declined to say how much revenue the company generates from selling ad space in its games. The company has struck past ad deals with Ford Motor Co. and Puma.

For those who still associate video games with clunky “Pac-Man” or “Space Invaders” consoles, here’s how in-game advertising works: The Xbox 360 console connects to the Internet, so it can be updated with new features, including ads. In the case of “Burnout: Paradise,” the game came out in stores in January, but the Obama ads were only inserted this month.

Ok this is something I came across and will be testing out. If you visit the website below it has instructions and downloads related to using your psp as a monitor for your pc. Now keep in mind this is supported only for us XP users. [sorry vista lovers] And also not supported on x64. So if you are running on Windows XP x86 and have either a psp or psp “phat” with a custom firmware then check it out.

here is a video of it in action

So this isn’t new to most hard core mod chippers out there. This might be new to the suddenly blooming homebrew community though and that’s why im posting about it. What is this though? Well this is for extreme Wii hacks only. It is basically a way to backup your Wii so if you fuck up the NAND you can always keep a spare so-to speak. I myself probably wouldn’t do this right now as im not a Wii Dev. But for any Dev.s out there this is a great thing to have.
-DarkWarrior
Via hack a wii

Well so much has happened in a small amount of time. Iv been waiting for a some major news before I [Dark] Updated the Blog.

First in the news is the first Snes emulator Was Released! This is a major step forward in the development of homebrew for the Wii. You will realy only need about 3 things for this to work, at least from what iv read so far.

Now with this hack comes a nifty lil DVD browser. This will allow you to search the DVD drive for ROM’s. This is very useful but im not sure if you can Browse the SD card for ROM’s. I think you can but seeing as I can’t find my Damn Zelda Disc I can’t make a tutorial, or prove it. You can bet that as soon as I find it I WILL TEST THIS!

More after the break

END_OF_DOCUMENT_TOKEN_TO_BE_REPLACED

OMG! Well lets see, its been only a few days since the homebrew hack was released for the Wii using a buffer overflow. You’d think that seeing as thats almost always the way consoles are hacked that this would be fixed. But lucky for me it isnt. I have a Wii and i can tell you im defiantly going to open my Wii up for homebrew. Ill [Dark] Be making a tutorial on how to open your Wii up for the awesome world of homebrew (and possible softmod?????)

For now all I can tell you is that you are going to need a copy of Zelda: Twilight princess. And not just any version either. There is a U.S. Version that is said to not play nice with the hack, more info later. (Oh god please have mine be compatible) 😉

PS3 getting a redesign?

Well iv been saying that this was gonna happen, but here we go.

According to T3 magazine and a “particularly well-informed insider,” playstation 4 precio is due not just for hard drive updates, but a total infographics design revamp down to a slimmer and smaller package sometime in the Fall. If you believe what you read, the refreshed console will sport all the same specs, but will receive a fresh coat of paint, a trip through the shrinking machine, and probably a lightened load. Of course, this is all just wild speculation coupled with salacious, magazine-selling 3D renders of the phantom device, as Sony denies the existence of an update and we don’t really know who this source is. On the other hand, the company pulls this kind of ditzy “who me?” stuff whenever it’s got a new product up its sleeve — though we’re not feeling the timing on this shocker.”

So what do you think now Zanthis? Ya thats right you suck.