Now you really can give a flying fuck! 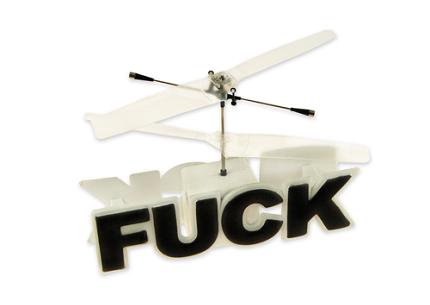 The image you see above is a flying fuck…no really it is. Its a RC Helicopter toy but instead of it having a model helicopter it has the word fuck. GENIUS!!!!!!!!!!

I cant be the only one who wants one 😛

OMG WTF H4X!!!! I have a real podcast now…a bit long I know but hey its real stuff not just crap…well it may be crap let me know in the links what you think.

Long show…Close to 30min long but the content is there.

Mentioned Links in the show…

*all links open in a new window* 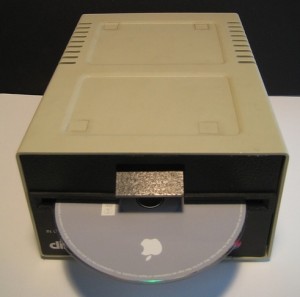 Apparently someone has more time on there hands than I do and put a Mac Mini into a Apple 2 Disk drive.

Ok so if you know me at all then you know for the past like 3 months ive been complaining that my computer sucks major ass and I needed a new motherboard and processor. Well a few months back my motherboard failed. So I went out and spent some cash on parts for a new system and to get my old system running while I saved some money. Below is a list of parts I got.

Ok so the parts themselves are new tech. The motherboard was a decent board that would play nice with all the parts and my old ass processor. So I was able to get my system back up for a while at a cheap price [$250~]. However performance on this thing. Sucks major ass. The CPU [p4 ht 3.2ghz] only gets a passmark score of like 300 to 500. So ya it sucked. Im talking 30~fps on counter strike source suck here.

So anyway. Today someone bought some old domain names I had and that pushed me over the top and I was able to order my new parts. Im going to use the parts from above because they are all compatible with these new parts and ill upgrade the ram to 8gb later on down the road.

I spent around $200 on this after discounts. [combo deal] This new processor aside from being a quad core beast. It also gets a passmark score of 2500!!!! Thats going to be a major boost to my current system. It will be the most powerful system I have ever built. I will be doing a whole write up on how to install the parts once I get them here. Should be no later than Wednesday. Hopefully they will ship it out monday and I will get it tuesday because of how close I am to neweggs shipping warehouse for the east coast.

So for now I am going to start backing up my 300gb of pron documents and music.

My first PDA was a PalmOS device. My first real smartphone was PalmOS. Ever since I have been into computers I have know palmOS so this is sad news that Palm is no longer going to make devices with the wonderful mobile operating system. While it will live on in the centro for a while they wont make any new devices. So after 13 years a operating system that has been adapted and upgraded from its former [colorless shell] it comes to a slow painful death.

Oh and my TREO 650 is in on suicide watch right now….lets hope it pulls through!

You know your product is in trouble when someone takes the headphones but leaves the mp3 player. Watch the guy take everything on the desk except the zune. Ok finished watching? Now go laugh at Billy.

Its mail time again! Here is the last package I am expecting for a while I promise 🙂

I got my 8gb sd card. Thanks newegg 😀

So one of my gadgets got here today! Take a look at the above video to see the unboxing 🙂