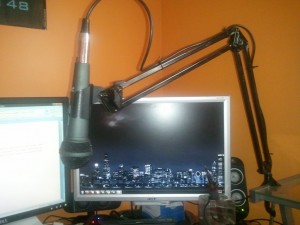 Ok, so now that I’m pretty much settled into my house, I’ve gotten my desk almost all set out like I want, right? Until I realize I don’t have a proper mic stand for my 2 microphones. And you can’t do podcasts without a mic (well you can, but it’s not as fun!) That’s when I start thinking about a particular clamp on desk light I had purchased a while back. Loved the way it was able to move because it was a ‘elbow’ lamp, HATED the light that was on it! So, once it was found I started to plot out how I planned to pull this off. I cut off the power cord for lamp, unscrewed the base of lamp from the stand, then with MINOR adjustments the mic clip I have screwed into the joint where there was once a lamp! Then all I had to do was run the mic hook up wire where there was enough give to bend the mic everywhere it needed to be with ease. Then all I did was zip-tie the cord onto the stand, run the cord down to comp to hook in, and sit back and enjoy another of my contraptions 🙂 Not a bad idea, considering all I was out was $3 if my idea failed (which rarely they do…I do NOT accept failure). Considering these mini boom microphone stands sell online for around $70 average, I can take the price of mine any day 😉

Happy birthday to us! Thats right everyone today is the offical birthday of TMS!

Ok so we have the return of the podcast… sort of. This is more of us talking to each other in podcast form just having a good time. No schedule no real structure and no time limit.

On this episode we have myself [Tracker] Dark and Qwerty [the noob] in the channel talking about some stuff with dark ranting about EVGA me talking about the iPhone exploit and how to upgrade your iPhones firmware while keeping it unlocked. Along with some of the changes that are happening.

TMS Episode 4: What to do with your old computers – ISP Ranting – Panoramic Photos

In this episode I have some friends joining me! Welcome the newest members Caboose and Care Bear!

We are talking about what to do with your old computer that you have collecting dust in your closet. A rant about ISP service and support and some panoramic photos. This show was recorded using ventrilo and I am not to proud of the quality but I am working on some stuff so hopefully it will get better over time. Any comments or suggestions just post them as a comment I welcome them all

OMG WTF H4X!!!! I have a real podcast now…a bit long I know but hey its real stuff not just crap…well it may be crap let me know in the links what you think.

Long show…Close to 30min long but the content is there.

Mentioned Links in the show…

*all links open in a new window*

Ok so yesterdays post was the equipment I was going to need and a bit about what it is I am going to do. So I am just gonna continue that.

I have quite a few domain names. Me and Dark were going to start a podcast a while back and call it random gamers. I bought that domain and a few days later Dark lost access to a decent computer. After thinking about it a bit I realized that it would not have been the best option anyway. New domain means no traffic. Themodshop has a good bit of traffic so why not do it on here? 😀

So thats where I stand as of now. I am looking for people interested in co-hosting the podcast as well as possible interviews with other bloggers out there. If you are interested shoot me an email tracker [at] themodshop [dot] net
Ok lets get back to what I was saying. I don’t have the microphone I ordered but other than that I have most of everything I need. Right now I am going to describe some of the software and the desktop that I am going to use for it.

Ok the computer I am going to use for this is my main pc. Now when I built this pc I only put 2gb of ram in it. So I ordered another 2gb because it was cheap [$25~] now if you are just doing audio you can get by with a lot less. But I plan on doing some videos so the extra power will come in handy.

So as you can see…I have a decent computer. Not the best but decent.

Now Windows movie maker does suck major ass. However it is easyish to use and comes with any windows os out there.

Audacity is a decent program that can record cut split add remove all that good stuff with audio. Its probbly what I will use for audio editing.

As far as the video. I am going to try and use Adobe Primer because I have it and it was suggest as one of the best out there.

That wraps up this part of the how to and I will be back with another part where I will give info on the inputs.

Gonna start a podcast….My How To! – Intro

Ok guys and girls after blogging for close to 3 years now [wow its been that long? /goes and checks whois on domain name….Created: 2006-08-08….damn] It is time to start a podcast. Now I have said in the past that I was going to but this time its for real! I am going to give a step by step on what I am using how its going to be hooked up and such as well as software you can use to edit the audio / video.

One thing to note is I am spending NEXT TO no money on this. However I do have a lot of equipment here. You can use other stuff or ebay it to get some cheap equipment. Now as this is the intro and I have not received the items I did pay for I am just going to run through a list of things I am going to use.

Ok so there is a list of what I am going to end up needing. I am going to stop there and keep the posts up with the podcast intro and hopefully soon a audio post!!!