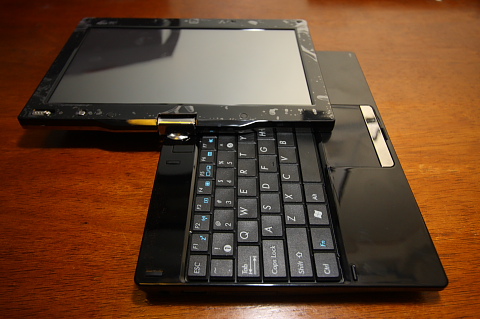 Well I had my eeepc 701 for a long time [well for a laptop anyway] and I figured it was time to upgrade… and upgrade I did. I got the Asus EEEPC T91 Tablet PC. Have had it for about a month and am prepared to explain the pros and cons of this little convertible pc

First off the specs

Ok so its not a super computer but it is decent!

Ok so let me explain the pros and cons… the T91 is a 8.9 inch tablet that can be used as either a netbook or a tablet.

Its small size and great battery life make it a perfect companion on long flights or car trips. The touch screen comes in handy for drawing or just playing games. Its also nice for reading e-books.

However it has a glossy black case that is a big fingerprint collector. I myself liked the matte black on the old eeepc but you cant win them all. The small keys take a little getting use to if you have been using a full size laptop but if you have been using a netbook you should be fine. It is also not very linux friendly due to the graphics chip but I prefer windows on a day to day basis so thats not a huge fault for me. The only major complaint I have is all the Asus Bloatware that comes bundled with it. While it is nice if you like yahoo widgets and such I just dont like it. However it is easily disabled and removed in about 30 seconds. It also ships with windows xp home. Why they did not include xp tablet I don’t know but I plan to upgrade this one anyway.

P.S. Sorry for the lack of updates life has taken its turns but hopefully the road is a bit straighter ahead and I will have a bit more time to do more on here! 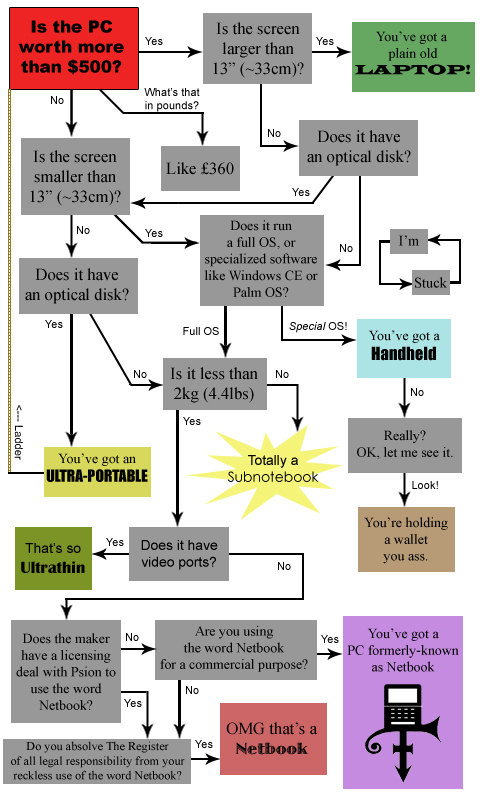 Simple answer. Look at the chart above 🙂

Ok so one of my favorite iptv shows Hak5 went to CES and they have some very kool new products from eeepc tablets to usb monitor outputs to underwater cameras. I really would not mind having all of the gadgets they had on the table. Whos going to Vegas next year? I know I want to!

Ok this is a GREAT program. It allows you to turn any iso into a bootable image on a usb stick or sd card. So you can throw your linux iso on it and use that to install it on your eeepc 😉

There are some operating systems that you can select from and it will download it and put it all on your usb drive with a few clicks of your mouse. It is from what I can see flawless. I have used it to test out backtrack3 on my eeepc as well as centos. So if you are curious about testing something like this out what better time than the present?

Ok so you have probbly seen HP’s netbook. This one normally goes for $499 but Amazon.com has one right now for $299 with FREE 2 day shipping! It comes with 4gb worth of ssd 512mb ram and linux and a 1ghz processor. If I had $300 I would buy this in a second! 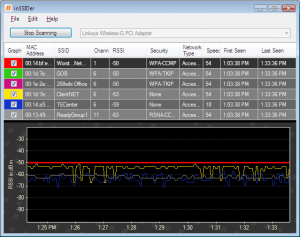 Ok so once again browsing the interwebs and I stumble upon another kool free program. The one this time is called inSSIDer. It will basicly take all the wifi networks and put them in a list for you. And then it will graph the signal strength. I can think of some fun wardriving applications to pair this with! I have tested it out on the eeepc and it seems to work decently so if you are looking for a program such as this then I suggest taking a look 🙂 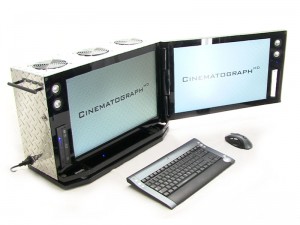 Ok so someone over at Modders-Inc made this beastly computer. Its sort of like an all in one on crack.

Full ATX motherboard [so the possibilities are alomst endless]

Who else wants one of these 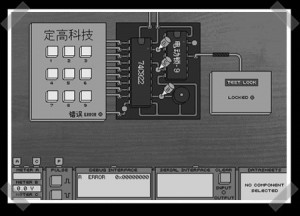 Well thanks to Hackaday I found this clash of clans hack tool interesting. But i have started to play other game and in my own opinion quite fun game. Its called Ruckingenur II [2]. The goal of the game is to use the tools provided to reverse engineer the given electronic device. If you sit and think for a second it is quite easy to figure out. I beat it in less than 30min. But it was well worth the download. It has the look of an older game and that I also like. So have fun and dont blow your self up playing it [You will see what I mean ;)]

[Zach Barth] has released Ruckingenur II, the game of reverse engineering. The latest in his Games for Engineers series, it is a full game with multiple levels and live action cut scenes. Set with a military theme, the goal is to reverse engineer enemy items. Pictured above is a lock to a weapons cache.

The pixelized style is consistent throughout. Even the cut scenes have the effect. The reverse engineering is fun enough to keep you interested while you learn. There is an in game help system that keeps you on track as well. Our only suggestion is that he get the best rifle scope next time!

Back when I lived in Florida the city of St.Cloud put in free city wide wifi. And it was so sweet you could get broadband wifi while going around town. Worked fairly well when you were traveling even. But then I moved to Kentucky. Now when I got up here the only source for wifi away from home was Starbucks McDonalds and a few other small places. Then in spring of this year they launched a new service. There is free wifi service in the 35square mile city limits. This network is sweet. 1 bad part is you only get 90 minutes a day on it. But the speeds are decent and the coverage is almost flawless.

The main function of the network is for the fire police and city workers. But they allow guest access as well.

Outfitted with mobile computers in their cars, police officers will have constant access to information such as outstanding arrest warrants, police records, and license plate information. In lieu of returning to the office to fill out paperwork, they can file reports from their cars, via the wireless network.

fire fighters will have access to graphical information such as building maps, traffic information, and driving routes. The network will help them to determine which trucks are closest to a fire.

While Bowling Green initially planned the wireless network to aid first responders, city officials also want to use the city-wide Wi-Fi for other municipal applications. For example, Housing and Community Development workers will file building inspection information from the field, and completed inspections will be transferred automatically to a main database. They’ll also receive inspection requests from the field.

Now this is no small project. First off they had to get equipment that could work outdoors in power outages give good reception and support multiple networks. That is where the hardware comes in.

Bowling Green’s network is an outdoor wireless mesh solution, comprising outdoor Wi-Fi access points (APs) and centralized network controllers from Cisco Systems. The
Cisco Aironet 1520 Series Lightweight Outdoor Mesh Access Points are equipped with radios that support the 802.11a/b/g wireless LAN standard, which offers data transmissions of up to 54 megabits per second; They provide more than enough bandwidth for data communications and video feeds, according to Steve Milam, manager of network operations for Bowling Green. When the multi-phase project is completed in the spring, the network will include some 800 outdoor wireless access points, spread across 35 square miles. The mobile computers and cameras that connect to the network also support 802.11g.

Standardizing on a single wireless technology ensures that all the public safety departments can communicate with each other. This is extremely important. Incompatibility of radio systems is a common problem among rescue workers. In fact, it is the problem that led to the deaths of more than 100 New York firefighters during the terrorist attacks of September 11, 2001; they failed to receive vital instructions from dispatchers because of failed radio transmissions.

In a wireless mesh, the network dynamically routes packets of information from access point to access point. A few APs have to be connected directly to the wired network, but the rest share a connection with one another over the air. Meshes are ideal for outdoor networks where a fiber connection is not always available. In Bowling Green, the majority of the access points will be attached to the city’s electrical poles, with the blessing of the local utility company.

Cisco’s Aironet 1520 Series wireless APs offer both a fiber connector and the option of running on battery power, which is crucial if there’s an electrical outage at any time. They’re also surprisingly hearty, which is important in cases of bad weather (Kentucky is prone to tornadoes) or bad drivers. While the network is still in its pilot phase, in a small section of the city, the access points have already proven their toughness, according to Milam.

“We had a drunk guy drive into one of the poles recently; the impact broke the pole in two, and knocked an access point onto the ground,” says Milam. “The AP fell 32 feet, and it kept working, running on battery. It had a couple of scratches on it, but it worked just fine.”

The access points also support Power over Ethernet (PoE) technology, which allows the transmission of electricity (along with data) over an Ethernet cable. To that end, network administrators can power the cameras on the network simply by plugging them into the PoE ports on the access points.

The wireless controller lets network administrators centrally manage all the APs on the network, troubleshooting potential problems and delivering software updates remotely. Mitigating the need for manual fixes is a boon for any network administrator, but it is especially important in an outdoor mesh network – where most of the access points sit 30 feet off the ground and out of easy reach.

The Asus EeePc is a great little laptop yes. But the resolution is to low for most things that people do.

So how do we fix this?