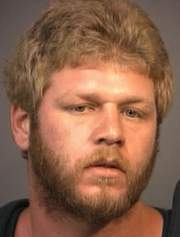 The man you see in the picture above is named Justin Heyne. On March 30th of 2006 he shot and killed Benjamin Hamilton, Sarah Buckoski and their 5-year-old daughter, Ivory Hamilton. Why? Because Mr. Hamilton made fun of him….On July 20th 2009 the jury selection began in his trial. While prosecutors are pushing for him to be served with the death penalty. The mother of Sarah is wanting him to be served with 3 life terms with out parole.

Now you may be asking yourself… “Why the hell is Tracker posting this?”

J.C. [Justin C Heyne] is the son of my step dads close friend. I have known them since I was about 6 years old. Matter of fact in a drawer in the other room there are baby pictures of J.C. This post just goes to show that you can never predict what someone will do.