I want to know…What do you carry with you at all times? [Comment!]

As the title implies I want to know what you have on or near you at all times. My list is perhaps a little longer than most would be….

Thats just about it.

So what do you have on or near your person at all times? Tell us in the comments! 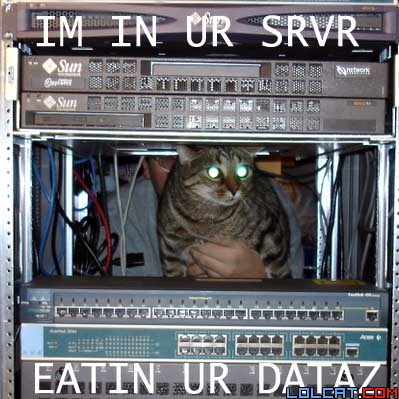 Ok so a friend of mine posted a thread on FWS about selling some of his old servers that he had colocated in the US [he is from the UK]. The servers although not that powerful were super cheap and I could not resist getting them. Now you may be asking yourself one of 2 things.

To answer #1 these new servers can be used to demonistrate many different tips tricks and mods that can be done. Such as home VPN servers (if you don’t know what is a VPN by now, Google it bro), Media servers, Home Web Servers, Proxy Servers, Clustered computing,…ect..ect..ect..ect.

To answer #2 it will allow me to get mods done on a topic that everyone can do. I mean come on we all have that old closet pc that does nothing right?

The new servers specs are as follows.

*Both are rackmount servers not normal mid tower pc’s*

Not the best but about average for your home closet pc. Now I am going to be able to show different things on a whole range of different hardware. Because on top of those 2 I also have some other hardware that I will be able to use.

So I have hardware in a range of ram and processor configurations not to mention the ability to run anything in a VM on this wonderful Phenom I have :).

As of right now the servers are still in a holding position. They should get shipped out sometime today from the datacenter and if they do get shipped today on time then they will arrive to me on the 29th. Then I get the fun task of getting all of the computers on the same network playing nice and not sounding like a jet is sitting in my office area. Pictures soon!

[I am taking ideas for stuff to do with this hardware other than trash it. Submit them to me HERE]

Ok so you have your new little pc sitting infront of you but you dont like that tabbed interface and wish you had a full desktop to work with…Well here are the simple and quick instructions.

Howto after the break

END_OF_DOCUMENT_TOKEN_TO_BE_REPLACED

Ok so my Asus EeePc arrived yesterday. So I got right to unboxing it. Just a note…I am sorry about the quality of these pictures. My camera was messing up and caused it to get a little blurry on some pictures. Anyway…here we go with the pictures.